In this scenario the French were attacking Le Haye Sainte and the ridge beyond. As historically the Rifles deployed as a line battalion and could not skirmish. To simulate the French Grand Battery we ruled that every British unit on the ridge would take one casualty per turn until the French came within musket range
This was also the first game using the Muskets and Marshals rules from Ian over at Hinton Hunt.
http://hintonhunt.blogspot.co.uk/. More on that in the reflections section

We deployed as per the map with a strong French attack against the farm and to the right against the ridge. A single brigade attacked to the left of the farm.

﻿
﻿
The opening attack was against the farm complex, with three French veteran battalions assaulting the German defenders. On the French right a steady advance took place that tied-in the Rifles.

﻿
On the French left a veteran brigade found itself opposite three battalions of Hanoverian landwehr and so attack vigorously driving back part of the front line. Due to their niffy caps and red uniforms they were quickly dubbed the Hanoverian post-men.

In the centre the battle for the farm continued. In M&M the combat system works by rolling dice and pairing highest to lowest, somewhat like in Risk. This does mean that high quality attackers in hard cover are awfully tricky to shift. For this reason as French reinforcements arrived they were used on the flanks not in the meat-grinder developing in the farm.

As things began to look dicey for the Hanoverians the Household and  Union Cavalry brigade arrived on the scene, accompanied by Lord Uxbridge. Somewhat uncharacteristically they did not launch headlong into a charge but lurked behind the ridge forcing the French attackers into square.

Eventually numbers began to tell and the German lights were forced from Le Haye Sainte, but not before a battalion of KGL had been able to reinforce the farm. 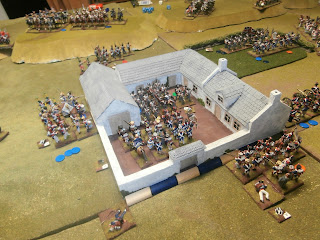 For the remainder of the battle most of the action occurred on the French left. With the arrival of some French cavalry and infantry they once again went on the offensive  and finally drew Uxbridge into an attack. This went well for the French who made steady progress on the ridge

On the French right the British mounted a limited counter-attack but were repulsed by musket and artillery fire. They withdrew behind the ridge leaving the high-ground to the French


The result was probably a winning-draw for the French. They had failed to capture Le Haye Sainte but had made decent progress on the ridge-line.

This was our first club gain with M&M having only previously played a large 20mm game. We had about 15 units a side and played 12 turns over two nights. We did gossip a fair bit though and could probably have got more moves completed.

The main feature of this battle was the difficulty of shifting good quality troops like the KGL when they are in hard cover. Even after 12 turns of almost continuous fighting Le Haye Sainte was only half secured. However looking at Waterloo it was tough to capture the farms. In pervious games we've used massed artillery to simply blast them and burn the place down.

Another feature of M&M is that fire combat tends not to be decisive or quick unless you are facing low quality troops. So some softening-up and then a quick bayonet charge feels like the way to go.