This was the first action of our latest campaign - waterloo as a series of loosely linked scenarios. The first was Quatre Bras. We depicted the position from about 1500 until the end of the battle. It was fought using Rank & File rules over 16 turns. 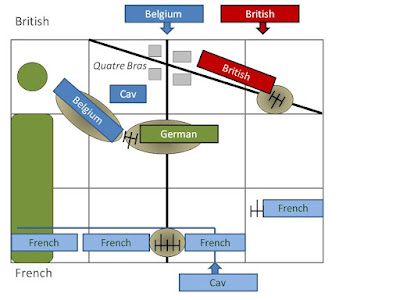 
The initial dispositions shown from both ends of the battle field.

The game began with a brisk French attack all along the line, with Ney himself focusing on the French left. The Belgium's on the ridge proved surprisingly resilient despite Slim Billy refusing to take to the reverse slope and spare them from the massed French guns.


Eventually the Allied front-line withdrew but no before the French had expended the best part of two veteran  brigades to dislodge them. Over on the right the act was more cautious with the French reluctant to storm the strong British line.

﻿
In an act of bravery or desperation Slim Billy decide to unleash the slightly reluctant Dutch Hussars against the French line. It was a brave charge but heavily mauled by the French infantry - well better luck next time Billy.

About half way through the game reinforcements began to arrive for both sides. The allies split these with the Belgium's taking the French left / Quatre Bras and the British Guards the French right. This strong British position dissuaded the French from any major attacks on that side for a while.


Eventually the pressure of the French attacks began to tell on the defenders were forced to fall back upon Quatre Bras with fresh infantry in hot pursuit.


At this point Ney﻿ choose to attack the flanks with his heavy cavalry. On the French right a Cuirassier regiment scattered the British Rifles (Sharpe was clearly on a break) but came face to face with a British square and was forced to retire. On the French left they fared better crashing through a wobbly Belgium regiment and accounting for the Brunswick Hussars. Wellington, now on the field, wryly commented that the Allied Cavalry appeared to be powder-puffs.

The pressure on the Allies was really beginning to tell now, with cavalry on the flanks a fresh French brigade approaching Quatre Bras. With a single move to go the Allies hit their army break-point and had to quit the field

In the end a close encounter with the French winning on break-point with just a move to spare put of the 16 allocated. The attackers had a 25% advantage, which is probably about right.

So why did the French win in the end? Well I would speculate that they understood the need for speed rather more than Ney did on the day, so pressed ahead more rapidly.

Perhaps more significant was command overload on Slim Billy. During the middle phase the allies might have tried to attack on their left with the strong British brigades there, but Billy was forced to adopt a static defence and focus on Quatre Bras. Later in the battle Wellington as able to lead a successful attack which might have indicated what was possible.

Finally the French were never in significant danger of hitting their army break-point as they were able to withdraw their damaged units into the second rank. so although lots were shaken / at 50% they only lost about 20% routed or destroyed

French unit of the day - the Dragoons who accounted for a Belgium line and Brunswick hussar regiment.  ﻿﻿﻿